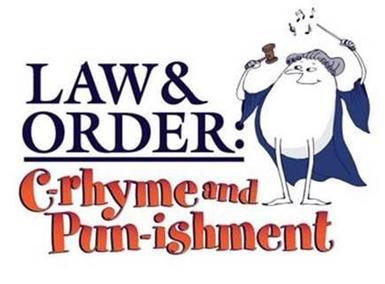 In the nursery rhyme justice system, the people are represented by two separate yet equally important groups — the detectives, who investigate the crime, and the magistrates, who prosecute the defenders.  These are their rhymes.  The Inspector and the Punnish Sir (Yes, he’s always scrambling for egg puns!) have been called in to investigate a crime scene where a Mister Humpty Dumpty has been found shattered and fowl play is suspected.  Can they solve the c-rhyme?

The following performances are scheduled:
April 3rd – Special PREVIEW of songs from the musical at the Salina Free Library
April 4th and 5th at 7:00 At the Roxboro Road Middle School Auditorium
April 6th – a Special Matinee at 3:00 to benefit Dollars for Scholars in memory of Catherine Ann Cifaratta-Brayton