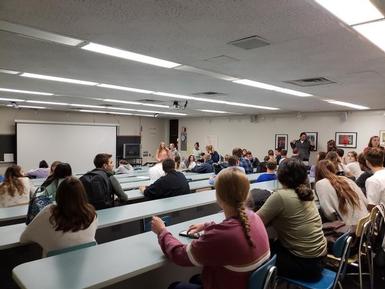 Hundreds of students at Cicero-North Syracuse High School have had the opportunity this school year to learn about important global issues, women's rights and terrorism, from experts at Syracuse University.

In October, the Large Group Instruction room was packed with far more than 100 students when two guest speakers came to talk about  journalism and sexual harassment. The two speakers, Rakesh Arya and Ha Thi Thanh Huong, come from the Humphrey Fellowship from Syracuse University.This group has 150 mid-career professionals from 97 emerging countries visit 13 universites. Ha Thi Thanh Huong is from Vietnam and Rakesh Arya is from India.

Ha Thi Thanh Huong, a journalist who covers political issues, talked to students about sexual harassment and her personal experiences with it. She expressed her surprise at the fact that 84% of women and 45% of men have experienced sexual assault, meaning the majority of people have experienced it.

While sharing, Ha Thi also told students that she didn’t tell her parents about the encounters because, in her country, sexual assault victims often remain silent so as not to bring shame to their families. Oftentimes, victims are ostracized and deemed unfit for marriage. Additionally, legal proceedings are largely unfair with the justice system citing lack of evidence in many instances.

In an effort to combat the injustice around sexual harassment in Vietnam, organizations have been developed that are now pushing to create government policy against sexual harassment and encouraging people to talk about it all.

Ha Thi's moving talk was impactful for students and she shared a call to action saying, “Violence isn’t the solution to stop sexual harassment...I’m not sure if you can stop (sexual harassment), but we can reduce the number of victims.”

The second person to speak on the topic of sexual harassment, Rakesh Arya, specializes in women’s issues. Through his presentation: Women In India; Contemporary Issues and Challenges, with students, he presented statistics, information on violence against women, and discussed the work force, the #MeToo movement in India, and much more.

As of 2016, there were 38,947 rapes, 64,519 kidnappings, and 110,378 cruelty from husbands/relatives, and the numbers are increasing. Various steps are being taken to combat these statistics: many laws have been put into place, women are coming forward with the #MeToo movement, people are reporting crimes, and there’s been major improvement with the sex ratio and socio-economic indicators. Rakesh ended his talk by saying the way to more forward is to “Understand, appreciate, and enforce laws...to have zero tolerance for crimes against women, and to give a voice through platforms realizing potential.”

For September's discussion on terrorism, Josh Kennedy from Syracuse University's Maxwell School of Citizenship, met with over 100 students in the large group instruction room at C-NS High School. Mr. Kennedy was very informative and held an engaging talk.

He began by telling attendees that the risk of terrorism is very low in the United States, and there are more deaths per year due to car accidents and drug overdoses than that of terrorism. The group then had thirty seconds to answer the question, “What’s the first thing you think of when you hear the word Terrorism?” The answers varied from 9/11 to the Taliban to the control of beliefs.

Mr. Kennedy shared how Terrorism has changed since he was young; years ago Terrorism was very much like in the movies with a person being held hostage in attempt to allow another one to leave the country. What changed? 9/11 was the fundamental shift for terrorism. When terrorist attacks occur it’s mainly, not all, of the time on government buildings to influence government policies. Mr. Kennedy also talked about jobs to help prevent Terrorism and the main question what draws people to terrorism. He then left the floor open to questions. All of the students who went left with more knowledge about terrorism than before!