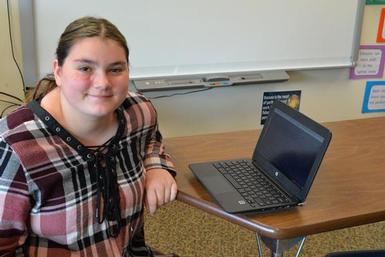 Angelina Crawford, a student at Gillette Road Middle School, has been named a recipient of the prestigious 2018 National 180 Student Awards, which recognize 15 children across the United States who overcame significant obstacles to become thriving, successful learners. The 180 Student Awards program, now in its twelfth year and organized by global learning company Houghton Mifflin Harcourt, honor students, who along with the help of their remarkable teachers, have made outstanding progress in literacy and math achievement and are now on the path to success in life.

Angelina’s teacher, Erika Gilbert, recalls a time when her student was having challenges with math proficiency.

“At the beginning of the school year, I rarely saw Angelina in class. She was often absent or tardy, and would miss classes,” said Ms. Gilbert.
But as Angelina continued with MATH 180, the intervention program that uses adaptive technology to personalize student instruction, she began to apply what she was learning, her outcomes started to improve and her mindset began to shift.

As Angelina started to take notes and ask questions, her Quantile® went from a 455 when she first began the program to her current score of 795. Ms. Gilbert attributes this growth to Angelina’s commitment and the structure of MATH 180, which allows students to work with manageable chunks of class work.

“I used to think math was not a big deal,” Angelina said, “but then I realized that everywhere you go, math is there,” she said.

Angelina’s aspirations include becoming a veterinarian, and Ms. Gilbert believes that with her surge in confidence and increasing aptitude in math, Angelina’s ambitions are highly attainable.

Student winners were carefully selected by an HMH committee based on several factors, including teacher recommendations, student statements and video submissions, as well as data demonstrating reading or math growth according to the Lexile® or Quantile® framework. Each winner will receive a cash prize, and the student's school district will receive READ 180, System 44 and/or MATH 180 materials for their school or district.